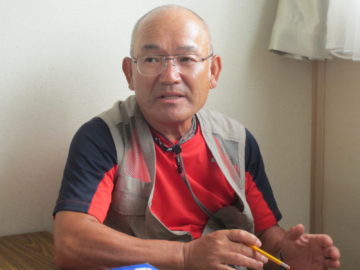 Then came the aftershocks.  They were terrible, too.  Noises were coming out of the houses.  Something was falling inside.  Dusk came, but there were no lights because of the blackout.  I turned on the engine of my car, which I parked outside, and switched on the TV.  It was then I learned the extent of the disaster.  The earthquake was magnitude 9.0.  I saw the tsunami rolling over the seawalls and crushing over houses, cars and people.  The water swept towns away. I learned the gravity of the disaster from the TV and felt the terror once again.

Later there was commotion around me.  The television was showing the devastation at the coastal area and Ukedo Port.  Everything was destroyed: automobiles, houses and the seashore.  There were reports of deaths.  Many people were entering the local gymnasium that served as evacuation shelter. Residents were arriving at schools.  It was horrible.

It became completely dark, but the blackout, hunger and fear of aftershocks kept us from sleeping.  Going back in the house was out of question, so we decided to rest in our car until the next morning. I think it was 6:15 on March 12, although lack of sleep, fear and fatigue prevented me from thinking clearly. The town’s loudspeakers started to sound, “Emergency! Emergency! Please evacuate!”  Without knowing what was going on, I gathered my family into the car, but as soon as we reached the national highway, the traffic was completely jammed.  What would normally take half an hour, took us three hours before we finally reached the evacuation center of Tsushima High School. The gymnasium at Tsushima High School was packed to the limit with people of Namie.  I tried to reach my siblings and relatives with my cell phone, but couldn’t get through because of poor reception.  There was absolutely no outside contact.  Without access to any information, our belief that our social system would give us a sense of security and safety, crumbled on March 12, 2011.

I didn’t know at that time, but some people said they had heard a loud explosion at 15:36 from the southeast of Tsushima High School.  Among the evacuees, there were different groups of people: those who had some information, others who did not, and others who were just whispering among themselves. Almost half of Namie’s residents were at the evacuation shelter.  Without any information, we were totally unaware that radiation resulting from the hydrogen explosion was flowing directly to where we were. There was no radiation alert issued by our Town, nor was there any from the Prefecture. We had evacuated, but we were not prepared for anything other than a normal situation. We simply did not know.