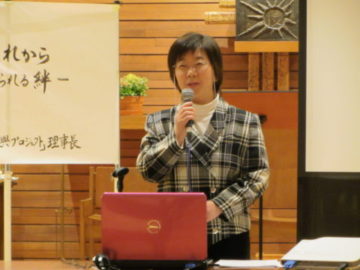 Constant moving causes the collapse of the community. We live relating to each other. But every move means separation from friends and those who are close to us. People become isolated. They have to build a community from scratch with each move. Some children, or even adults, cannot adapt to their new environment. After three years at temporary housing, those who can support themselves are first to leave. People who serve as presidents of temporary housing associations leave first. Then, the remaining residents have to elect the next president. Some residents refuse personnel changes and managing the residents becomes very hard.

People who evacuated and left Fukushima Prefecture are changing their mind about returning. When surveyed in the first and second year, many of these people expressed their wish to return. As the period of their stay outside of Fukushima extended, they became attached to their new places, especially when they found new jobs there, or children started enjoying their new school lives. After three years, the survey reports that more and more people do not want to return. People who are persistent in their wish to return are the elderly. They want to return at all cost.

We have launched “Fukushima Yasai-Batake” (the Fukushima Vegetable Garden Project). We decided to start the project after we saw on TV news, the hardships farmers in Fukushima had to go through. Farming is indispensable for our lives. Other occupation makes our lives convenient, but we can live without them. Farming is collaboration between God and Man. Farming gives us the opportunity to learn that we humans, are God’s creation, and are able to live only by God’s blessings. Fukushima Prefecture boasts the largest number of farmers in Japan. And the same Fukushima is now suffering from the nuclear accident. This makes me think the disaster must be a God’s warning to the highly developed Japanese civilization. The harvest is the fruit of our work, food for our life and blessing from the land. I think we have forgotten this for a while. We Japanese tend to think money can buy anything. But, is it right to import everything that we don’t have here in Japan? Some foreign produce is made under unclear food safety measures, such as lax pesticide control. I think we have arrived at a time to fundamentally rethink about the food that sustains our lives, and how we should eat them. One of the intentions of our Project is to raise awareness about food.

In July 2011, I approached Catholic churches in Tokyo with the idea of selling Fukushima’s vegetables to parishioners. We started as a private business and became a non-profit organization in April 2013. Thanks to your support, we are now able to sell vegetables at five or six Catholic churches every week. We visit a total of 40 churches; some of them once a month, some twice a month, still others every week, or only at charity bazaars. Initially, we had to ask churches to let us sell, but then word of mouth has led us to more churches. We were worried that our relationship with the churches might be severed within a year or two, but we are now one full year into this and thankfully, not even one church has called for a stop to our activity. On the contrary, the number of churches that we visit to make our sales continue to rise. All of them are continuing to be supportive. We are truly and deeply thankful.

Many farmers in Fukushima are giving up farming. But there are also farmers determined to restore their farmland for the love of farming. There are also quite a few farmers here who farm without using pesticides. A farmer whom I have contact with, practices organic farming and is currently is working hard to improve the soil with the help of microorganisms.