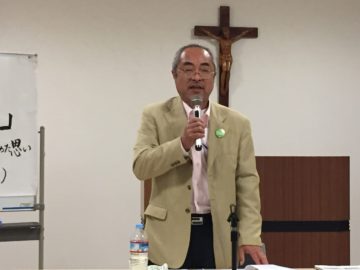 Hello, I am Masahiro Yunokawa.
We are a family of six including myself, my wife, three children, elementary Grade 5 and 3, kindergarten, and my 78-year-old mother. (Age at the time of the disaster)
I run a liquor shop at Tatsugoyama in the suburbs of Fukushima City. It is located some 50 km away as the crow flies from The Fukushima Daiichi Nuclear Power Plant. Route 114 in front of the shop connects Fukushima City and Namie Town. It passes through Kawamata Town.

The Great East Japan Earthquake of Magnitude 9.0 and the massive Tsunami hit the Tohoku area on March 11. From March 12 to 15, the Fukushima Daiichi Nuclear Power Plant exploded, and a great amount of radioactivity flew towards Fukushima City along Route 114. From that day on, our ordinary and calm lives completely changed.

After the successive meltdowns of #1, #3, #2 and #4 reactors, the flying radioactive substances read 23.88 μSv in Fukushima City the night of the 15th, which was 478 times of that of the normal condition. Looking at the TV news the morning of the 16th, I thought it dangerous to live in Tatsugoyama, and we evacuated temporarily to Sasaya, west of Fukushima City, where my married daughter lived. My mother moved to my married sister’s house in Ozaso, also west of Fukushima City, so the whole family stayed in the same western part of Fukushima.
After a while, we received a notice that my youngest daughter’s nursery would have a graduation ceremony. We were obliged to return to Tatsugoyama. The very next day of the graduation, I made my wife and children evacuate to Towada City, Aomori Prefecture to spend the spring holiday, where my wife’s married sister lived. My mother continued with my sister. As for myself, I remained at home, for I had to work. We lived separately for about two weeks.
Meanwhile, I received another notice that elementary school would hold an entrance ceremony and classes would start in April as usual. Since our youngest daughter was at the school age, they had to return from Aomori. Our three children, 6th, 4th, and 1st grades, started to go to school together.
At the initial stage, TV stations and newspapers did not report much about radiation, but the contamination fact in Fukushima City had gradually been made known. “Make sure that school children wear hats and masks.” “Wear long-sleeved shirts and long pants to cover the skin. Skirt is of no use.” Such was the situation in Fukushima. The playground had high radiation level. They could not play in the schoolyard at all. They did not know how to spend their time after school.

The National and Fukushima Prefectural Governments did nothing but repeating the cliché that there would be no immediate damage to health. No other information than that was given us. In mid-April, the Yamakiya district of Kawamata Town and Iitate Village were designated as a planned evacuation area due to high radiation level, and everyone in the districts had to evacuate. These two are 10 km away from my house, less than a 30-minute ride. I made a guess that the radiation level was as high in Tatsugoyama as in Yamakiya district and worried that it might affect us. Or perhaps the Government might give the order to evacuate. It was just about that time when I started thinking of our evacuation that the radiation level during outdoor school activities was fixed as high as 20 mSv per year, that is 3.8 μSv per hour. Prof. Toshiso Kosako of the University of Tokyo, the then councilor of the Cabinet Secretariat, had resigned in protest at the government safety standard. Shedding tears, he said he couldn’t accept such a high level as that. Since such a person of authority resigned in protest, I thought that I really should not let my children live here and be exposed to radiation. I left them in the care of my relatives in Tokyo during the Golden Week (consecutive holidays from end April to first week of May) and kept looking for a place to live.