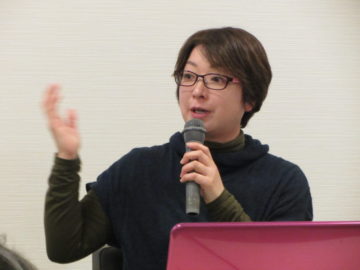 The Earthquake, Family and Community-Building

“Makokoro,” creating a space to relax
Makokoro has begun as a salon for the earthquake and the nuclear accident victims to offer a space in the temporary housing and to help them not isolated and withdraw into themselves but to familiarize themselves with newcomers over a cup of coffee.
The idea came from Mr. Masato Uchida, the present representative of “Makokoro.” He was a member of a local fire brigade at the time of the disaster. He did not evacuate even though all the citizens were under the evacuation orders but continued searching for corpses wishing that he could be of any help in whatever small ways he could. Every time he faced a corpse, he was convinced that he must do anything that he could do to keep the bonds in the communities of his hometown when he saw they were broken in this catastrophe.
Most people were depressed then. Having lost everything in an instant, and been separated from their families and neighbors who had supported each other, they felt daunted, isolated and worried.
Some people under the evacuation orders had to part from their children and grandchildren because of the nuclear accident. Having lost their houses or being unable to live there any longer, they worried about their everyday life thereafter. They were deprived of all ‘normality,’ even laughing.
I thought what they need was peace of mind and heart to think that they were not the only ones who were suffering. I became aware that the first thing I should do was creating a place where they could laugh. Maybe it was I who needed it most. At that time, all the victims felt it a sin to laugh.

Unacceptable reality
People who could smile without a sense of guilt were only those whose daily living had no change even in these catastrophic losses.

Watching them, frankly, I even felt hatred for them. “Why did this happen to me?” This was how everyone was emotionally and mentally unstable. Everyone in the shelter always got strained. Even if we were in the same boat, each was in different situations, hence different feelings and thoughts. This was not a place for those, just like me, who could confirm all their family members were safe.
In such a situation, the evacuation orders were issued because of the nuclear accident. No petrol was supplied to Minamisoma city nor even emergency relief. Buses were provided for the evacuees to get out of the prefecture. However, some people remained there. Lamenting their fate, “I am the one who suffers most,” they could not accept the situation.
Until the temporary housing was completed, some lived in a shelter, others stayed temporarily at their relatives,’ or rented an apartment. Everyone wanted to do something somehow in vain.