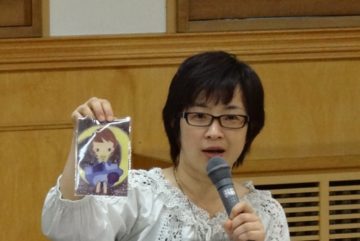 Nobuki: Some children in the video are in the KiraKiraboshi Net Study Program and the piano lessons. I’ve seen them since 2011; first graders in 2011 have become fourth graders and newborn babies are now three years old. I feel as though I am watching children of my relatives grow. I am grateful for this opportunity given to us to convey what we feel and think. I heard there were many people who, in the midst of the breakdown of media network and the absence of fresh information, had to rely on their own communications network. Let me ask, Ms. K, what prompted you to evacuate from Fukushima?

Ms. K: We evacuated at an early stage after the disaster. We started off before the explosion. My husband had been following events after the Chernobyl accident, and said that an earthquake such as this would cause something very serious and dangerous. We left our home before dawn on the morning of March 12. We listened to the radio newscast on the way and were scared. It just happened that we had sufficient gasoline in our car, so we could evacuate early. Later, some of my friends emailed and asked me how far we had gone, and where they could get gasoline. They were desperate to evacuate, but were worried if there would be enough gasoline for the journey. Under such dire circumstances, they shared whatever small amount of gas among themselves. There were many who wished to evacuate, but were unable to. The reason for our earlier evacuation was that all appliances in our house were electrically-operated. When a power failure occurs, the room temperature rapidly drops to minus 2 degrees Celsius in winter. My 84-year-old father shuddered with cold when this happened. We were certain that if the power failure continued, he would catch pneumonia. In any event, with an elderly person and my two sons, it would be dangerous to stay on until a total blackout. And so, we decided to evacuate at once.
A nursery, and the preschoolers in it, had been swept away by the tsunami. Pregnant mothers too, were unable to escape. In Iwaki City, which was hit by the tsunami, people continue to search for the many elderly who were unable to escape. My heart broke to hear many of such stories.

Nobuki: You eventually arrived in Tokyo. So, where did you first go to after evacuating from Fukushima?

Ms. K: I had moved to Fukushima after my marriage and 15 years had passed. I was born in Yokohama. My first thought was to bring my father to Mom in Yokohama. It took us 19 hours to Yokohama, stopping along the way for rest. I was worried about father getting into economy class syndrome, so we took turns massaging his back. There were some, we learned, who died during their journey of evacuation.
We stayed at my mother’s house for three days. On the second night, my mother who was already ill herself, told me with tears in her eyes, to look for another place. She said she no longer had the strength to help care for her grandchildren, and it looked like it was going to be a long struggle. We soon started to look for an apartment in Tokyo. At that time, I never imagined that I would end up in an emergency shelter. I had thought, no matter how costly it was going to be, I would find my own place to live. Fortunately, we could find an apartment which required no deposits. We had bought a set of used household appliances, such as washing machine, vacuum cleaner, etc. We were certain we could not return home, so we acquired everything that was necessary. I am afraid to look at the receipts even now. About a month later, through our own personal information network, we found out about Asakasa Prince Hotel, and were able to move there at the end of April.