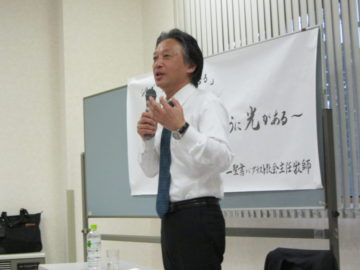 At the End of a Tunnel, There Is Always Light.

I was a pastor of a church that was built around 70 years ago at a place about 5 km from the Fukushima Nuclear Power Plant. However, due to the Fukushima Nuclear Power Plant accident caused by the Mega Earthquake back in March 2011, our hometown has been shut down, and three and a half years ago, I built a new church in Iwaki City, located at the edge of Fukushima prefecture and 70 km from the original location.

It is very encouraging to know that there are still people that deeply care and listen to us talk about the earthquake and its aftermath, even after six years since the disaster. Additionally, I have the highest respect for all the Catholics who have been working selflessly and tirelessly in the disaster-struck areas. Today showing a video clip, I would like to talk about the catastrophe as a bystander and as a victim. Please watch “the first account of the Creation to the 2011 Great East Japan Earthquake. Now, there will be gruesome images of the tsunami, so feel free to look away if you feel uncomfortable.

(The earthquake video and its explanation)

Now, please view the map while keeping the room dark. It was considered until five years ago that the disaster area spread mainly from Iwate Prefecture to Fukushima prefectures but also included parts of Aomori and Ibaraki prefectures. It was the second largest that follows the Mega Earthquake of Jogan of 1200 years ago. When you zoom in to Iwate prefecture, you may notice its unique rias coast (a saw-toothed coastline). Because of this coastal feature, the tsunamis entered the shallows and increased its height to three times the original height and doubled its original speed. This led to the death toll of some 5,000. Being located in the plain, Miyagi prefecture, which had the Sendai Airport I frequently used, was hit by a tsunami with a height of 15 m, even it is 5 km away from the shore. This was beyond all expectations and led to approximately 10,000 deaths.

As I am from Fukushima prefecture, I know the number of deaths by the tsunami was around 1,600. However, there are more than 2,000 deaths directly relevant to the disaster (suicides, stroke, etc.). It was because the Fukushima Nuclear Power Plant exploded, and at that time some 70,000 residents in the radius of the Nuclear Power Plant, and later the greatest number of 135,000 to 136,000 had to evacuate from their hometowns. they all had to go on an incredible journey away from their hometowns.