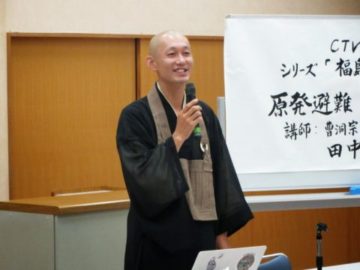 I grew up in an ordinary Japanese family. When I was a high school student, I played baseball but I was not good at it. I practiced too much to get hurt, and was hospitalized. It was during that time when my teacher recommended the book, “Miyamoto Musashi” by Eiji Yoshikawa. I read it and was extremely attracted by a character in the novel, a Buddhist high priest Takuan Osho, and wanted to become like him. This is the reason why I became a Buddhist priest.

My Buddhist formation started in 1997 for five years at Eihei-ji Temple in Fukui Prefecture. After that, I was welcomed to Doukei-ji Temple in Odaka, Minamisoma City as assistant chief priest. Seven years ago, the chief priest suddenly passed away, and I have succeeded him. I also became chief priest at a branch temple of Doukei-ji, called Chuzen-ji in Futabamachi eight or nine years ago. I am married and have four children, aged 9, 7, 5, and 1. This is what my life was like when the earthquake struck.

First, I would like to talk about the history of this temple. It was built in 1213, and this year (2013) is exactly the 800th anniversary. In 1394 during the reign of 13th lord of the Soma Clan, the temple changed from Tendai Sect to Soto Sect and was renamed Doukei-ji. The Soma Clan has continued since the Kamakura period (14th century), and was known as highly religious lineage. There are only three clans that have continued since this period until the Meiji era (1868-1912), when prefectures were established to replace feudal domains. Those three are the Nambu Clan in present Iwate Prefecture, the Shimazu in Kyushu, and the Soma in Fukushima Prefecture. The Soma was a small domain of 60,000 koku (approximately 10.8 m liters of grain yield). The amount is said to be an exaggeration, and actually was a half of it, 30,000 koku. One of the good aspects of being small was that the lords of Soma Family were closely related to their people. They even drank together. As you know, “nomaoi” (horse chasing), a traditional Shintoistic event of this region, has continued for more than 1,000 years. The ancestor of the Soma Clan is said to be Taira no Masakado, a 10th century commander. This festival, “nomaoi” is held once a year by gathering horses pastured on meadow grass. (Note: nomaoi includes a variety of competitions among samurai horsemen.)

Until the day of the earthquake, we all lived a peaceful life. We had been worried about the nuclear power plants every time when there was an earthquake. Immediately after that of 3.11, I knew instinctively that that’s done it. The temple was considerably damaged. When the quakes stopped, I went to school right away to bring my children back home. Talking with everyone in the community, we decided to evacuate. Seeing off neighbors and parishioners who gathered at the temple, I drove to Fukushima, a city 60 kilometers away from Odaka.

On the way to Fukushima, children became emotionally unstable. They cried every time when the wind blew. We made a stop at “Fukuro Association,” and then went to Sakaemachi Church in Aizuwakamatsu City. We stayed there for a while and then drove again all night to Nagano Prefecture. The next day, we moved to Fukui City, and my family finally settled there.