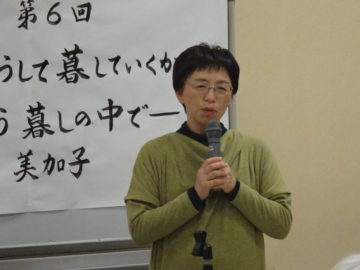 How do we live with radioactivity in Minamisoma

In our region of Minamisoma city, about 25 km north of Fukushima Nuclear Power Plant, we had little damage from the earthquake itself. Though within the city, there are areas of devastation caused by Tsunami. In our neighboring towns of Odaka, south of Minamisoma and Namie, further south, buildings were leveled to the ground. Those areas are within 10 to 20 km distance from the Nuclear Power Plant. I heard that an official bulletin was circulated the morning of the 12th in Namie, saying “This is Prime Minister’s order. Please evacuate immediately.” It was before the explosion. In the 3 km-zone from the Nuclear Power Plant, the residents could escape on the 11th by buses that the government prepared.
However, being unable to get buses ready in time, the government ordered the residents of Futaba town in the 5 km-zone of the Nuclear Power Plant to evacuate with the least possible delay by their own cars. Some 5,000 among 7,000 residents evacuated, or rather escaped by themselves, others evacuated by bus later. They were told “Take only the valuables and bring as minimum luggage as possible,” and left the town without locking the doors because the town is safe, there is no thief around. They had thought they could return soon.

We could find no shelter in this emergency, although the Administration desperately looked for places that can accommodate all the citizens at a time. We moved from one place after another. It was just like we had “drifted” around for three days here and a week there. It was Tsushima in Namie town that the residents in the 10 km-zone moved first, then to Iitate village, Kawamata town, Koriyama city and Fukushima city…. They only came to know later that the first shelter was in the district highly contaminated with radiation.
Having no information about the radioactivity, they washed their hands with snow in Iitate where there were water shortages. The children from Hamadori where snow rarely falls in winter played with it. A water shortage was a headache wherever they went. Every time the water wagons arrived, mothers took their children with them and lined up in the long queue. They could do it because they had no knowledge about the radioactivity.
We eventually got information little by little. Iodine tablets were not given us. The reasons were difficulties to choose the timing to take the tablets and problems of side effects. (Note: Miharu town distributed the iodine tablets to the townspeople.) Although the radiation safety guidelines were drawn up, the figures were for adults, but no safety lines for children were not written at all. Therefore, mothers have endured great hardships now.

In Minamisoma city, the Odaka district in the 20 km-radius of the Power Plant was designated as an evacuation zone, and all the residents evacuated, while the residents in the Haramachi district in the 30 km-radius were told to keep themselves confined at home. Children, pregnant women and the elderly were advised evacuation. The mass media, postal services, and banks were all forced to stop their services. So was ATM. Those who had no cash with them could not buy a thing. What made matters worse was a bashing towards nuclear accident victims and evacuees.

When the news that cesium was detected from the cattle reared in Minamisoma was released, freight companies were strictly banned access to the restricted zones, therefore, no supplies nor information coming in. All the goods were suspended somewhere around Koriyama. We were almost on the verge of starvation, much less forage coming in for cattle. Farmers had no information given that rice straw was contaminated with cesium, it was quite natural that they fed their cattle with rice straw collected on their farm. But they took an awful bashing. We truly got angry with the mass media. Radiation is the root of all evil. But people looked as if it was negligence on the part of individuals who caused the panic like this. The radiation is invisible. This was nothing but changing a real issue for another.

From the very beginning, I have disagreed with the Nuclear Power Plant. I know there is the active fault right under the Power Plant in Futaba town. At the beginning, I had raised my voice: “It’s dangerous.” “We can’t escape if an accident happens.” However, I had gradually had confidence in science technology over a long time span of 40 years.

We human beings are consisted of water, air and soil, aren’t we? I was made aware of this for the first time when the ground of our hometown was contaminated with the radioactivity and we could not eat foodstuffs cultivated on our field. We eat local foodstuffs grown on our farm and change the life into our bodies. Our bodies are consisted of the earth of our hometown. That is why the foodstuffs from other regions never satisfy us, even if they are safe.